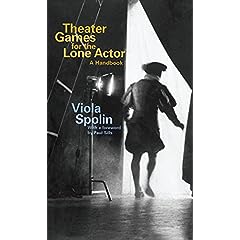 Spolin Games. That sounds like it could be a new set of titles for the Xbox.

The Spolin Games are a set of improv theater games invented by Viola Spolin in the nineteen-thirties, and refined by her for the next six decades. These games are used in im­pro­vi­sa­tion­al work, to help bring out creativity and spon­tane­ity. Viola’s son, Paul Sills, founded the Second City improv theater company in Chicago back in the nineteen-fifties.

I was first introduced to the Spolin Games last year. Two friends of mine are actors. They had both become involved with a local improv troupe, the Spolin Players, who have occasional runs at the Northwest Actors Studio, at 11th and Pike, in Seattle.

I got interested enough that I later took an improv class from the troupe’s director, Gary Schwartz.

I’ve been to several shows put on by the Spolin Players. Each one is quite different. During a show, they’ll play a dozen or so games, from their repertoire. Usually, there are six-to-eight actors from the troupe.

The show often opens with a game called Emotional Symphony. Each player is assigned an emotion by the audience, such as fear (oh no! I’m terrified! I just want to hide!); lust (ooh, baby! You’re hot!); anger (I’m mad as hell and I’m not going to take it anymore!); or confusion (but, but, but, I don’t understand). The director acts like a conductor, pushing the players through an overture, bringing them in louder and softer, growing in a crescendo to a climax!

This energizes the players and wakes up the audience.

The Gibberish Relay is another game that’s usually played early on. Three players sit on chairs at the front of the stage. The one on the left speaks one dialect of gibberish, the one on the right speaks a different variety, the one in the middle interprets.

After a minute, one of the players leaves, the other two shift over, and a new player joins them, until the entire cast has cycled through each role.

One crucial element was missing from the demon­stra­tion that I just gave you. Spon­tane­ity! In a real game of Gibberish Relay, none of the three players know what’s going to happen next. They’re feeding off each other, creating a scene out of whole cloth. They’re off-balance and they’re fully engaged. It’s like going to a sports game. You don’t know what’s going to happen next or who’s going to win. The not-knowing keeps you interested and in the moment. There’s give-and-take at play. Each player is following the other’s lead. Surprise is the gift that playing produces.

Magic Music is another game that’s often played. One of the players is sent offstage, out of earshot. The audience decides a complex task that the player must accomplish on a prop-laden stage, such as climbing onto a chair, turning coun­ter­clock­wise, and putting a flowerpot on their head. When the player returns, the audience are singing a simple song, such as "Twinkle, Twinkle, Little Star." The audience sings louder as the player grows "warm" and softer as the player gets "cold", until the player figures out what to do. Often, the game is repeated with a volunteer from the audience.

The game of Camera involves focus. The audience decides upon a scene for two of the players, such as a teacher and a parent, or two people in line for a concert, or a mugger and a vigilante. As the two players work through the scene, the director calls out "Camera!", al­ter­nat­ing between the two players, "Both camera!", and "No camera!". For "George Camera!", I would look intently at the other player, as if I were a TV camera, tracking her every move. For "Mary Camera!", Mary would look intently at me, while I would play the scene naturally as if there were no camera at all. The act of focussing heightens the scene.

Now, let’s demon­strate one game, Last-Letter Expert, with the help of Phil here.

In Last-Letter Expert, I am a genius who can expound on any topic of your choosing. The only catch is that my brain is so over­pow­ered that it seizes up oc­ca­sion­al­ly in mid-sentence. My assistant Phil will interject a word to help me out. I have to use the LAST letter of his word as the FIRST letter of my next word. So if I were to say, "There are many varieties of ice cream that …" and Phil says "suddenly", then I have to pick a word that starts with the letter "Y" and continue from there, like "Yelp loudly" or "Yet de­light­ful­ly".

Please, give me a topic, such as volcanoes, shoelaces, ice cream, walking on your hands, daffodil farming, the color yellow, …

[Re­con­struct­ed from a recording. Phil hadn’t quite got the idea of Last-Letter Expert. The in­ter­ject­ed word should make some kind of sense in the context of the preceding sentences. "Tempest" was the Word of the Day.]

George: Chairs. Fellow members of the audience, chairs have been used since time immemorial. They are extremely…

George: Nowadays, we. Repairman? Nowadays, we sit on them. In times past, chairs were used to elevate people above the common level of …

George: so that you could do something extremely silly like this. And…

George: To begin again, without such useful help, I would like to say that chairs are…

George: Therefore, they are very easy to sit upon.

But enough of that. We’re running out of time.

Viola Spolin’s work is used by many actors and directors to help increase their creativity. There are many other games, but I don’t have time to describe them here. Go to spolin.com if you’re interested in learning more. S-P-O-L-I-N. Spolin.

I was also the Table Topics Master for that meeting. We played Last-Letter Expert. It took a while for people to get the hang of the game, but it was a big hit.