I installed dasBlog at Emma’s The Wheel site, so that she and the other knitters in Team Ireland can blog during the 2006 Knitting Olympics. What an ordeal that was! But that’s a post for another time. (It’s not working yet, due to per­mis­sions issues that require the in­ter­ven­tion of support at our hosting site.)

I decided today to create a favicon for The Wheel, based on the logo that I drew last year with Inkscape. 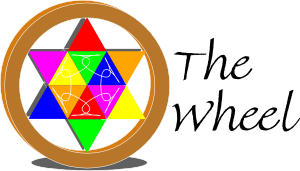 A favicon is a 16x16 icon which shows up in the tab in a tabbed browser, such as FireFox or IE with MSN Search. For example, the little gvr icon that shows up if you’re reading this on my personal blog. I think I created this with a trial copy of Mi­croan­ge­lo Creation, but I’ve repaved my laptop since then, so I’m not sure.

Initially, I drew the favicon by hand with the icon editor in Visual Studio, since it was the only tool that I had handy at work. It looked like crap.

This evening, I remembered about the automated FavIcon from Pics service over at HTML-Kit. I stripped the wording off the logo and submitted that. Much better! And much easier than using Visual Studio’s horrible icon editor.

If you look at it with Magnifixer, you can see that this image has ef­fec­tive­ly been heavily anti-aliased. Or rather, FavIcon from Pics did a good job of shrinking the original image.

I had to flush Firefox’s cache before it would pick up the new favicon, whereas IE picked it up after Ctrl+F5. Score one to IE.