On Saturday night, at the White House Cor­re­spon­dents Dinner, Stephen Colbert did something brave and unparalled. Standing 10 feet from George Bush and in front of an audience of hundreds of members of the Washington press corpse, Colbert, acting in his persona of a Bill O’Reil­lyesque pundit, flayed them with irony and sarcasm. 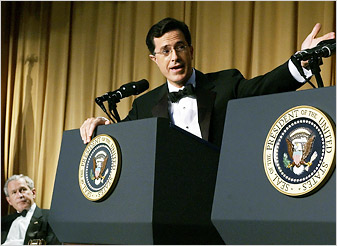 The greatest thing about this man is he’s steady. You know where he stands. He believes the same thing Wednesday that he believed on Monday, no matter what happened Tuesday. Events can change; this man’s beliefs never will. As excited as I am to be here with the president, I am appalled to be surrounded by the liberal media that is destroying America, with the exception of Fox News. Fox News gives you both sides of every story: the pres­i­den­t’s side, and the vice pres­i­den­t’s side.

But the rest of you, what are you thinking, reporting on NSA wire­tap­ping or secret prisons in eastern Europe? Those things are secret for a very important reason: they’re super-depressing. And if that’s your goal, well, misery ac­com­plished. Over the last five years you people were so good – over tax cuts, WMD in­tel­li­gence, the effect of global warming. We Americans didn’t want to know, and you had the courtesy not to try to find out. Those were good times, as far as we knew.

But, listen, let’s review the rules. Here’s how it works: the president makes decisions. He’s the decider. The press secretary announces those decisions, and you people of the press type those decisions down. Make, announce, type. Just put ‘em through a spell check and go home. Get to know your family again. Make love to your wife. Write that novel you got kicking around in your head. You know, the one about the intrepid Washington reporter with the courage to stand up to the ad­min­is­tra­tion. You know - fiction!

Because really, what incentive do these people have to answer your questions, after all? I mean, nothing satisfies you. Everybody asks for personnel changes. So the White House has personnel changes. Then you write, "Oh, they’re just re­ar­rang­ing the deck chairs on the Titanic." First of all, that is a terrible metaphor. This ad­min­is­tra­tion is not sinking. This ad­min­is­tra­tion is soaring. If anything, they are re­ar­rang­ing the deck chairs on the Hindenburg!

What balls! To stand in front of that crowd and show them up for the fools they are.

Update: A much more eloquent essay, The truthiness hurts, at Salon.

Update #2: www.ThankY­ouStephen­Col­bert.org has over 50,000 signatures as of May 7th. And the Stephen Colbert Musical Ex­trav­a­gan­za is very silly.