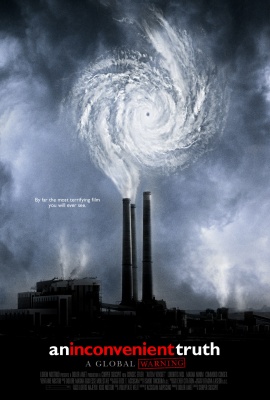 As I implicitly promised here, we went to see Al Gore’s new doc­u­men­tary on global climate change, An In­con­ve­nient Truth, when it opened in Seattle last night. We brought some friends too.

Gore lays out a compelling case that global climate change is real, that it’s been happening for decades, and that it’s spiralling out of control. He backs it up with plenty of statistics and graphs.

Gore points to a review in *Science* magazine of 928 peer-reviewed scientific articles discussing "climate change". Not one of the papers disagreed with the scientific consensus that "climate change" is a real phenomenon. He points to a similar review of leading US newspapers over the last fourteen years, where more than half of the articles gave equal weight to the scientific consensus and to the view that human beings played no role in global warming.

The "con­tro­ver­sy" has been man­u­fac­tured by front groups for Exxon-Mobil and other leading polluters, just as the tobacco companies tried for decades to confuse the public about the linkage between smoking and lung cancer.

Gore earned the reputation in the 2000 election of being dry and wooden, but here he’s engaging and animated. It’s clearly a subject that he cares deeply about, and one that he’s been agitating about for more than 30-years. He says that he’s given his slideshow, which we see in several forms, over 1000 times, and he’s gotten very good at delivering this message. The film is filled with science, but there’s also a human touch. Gore brings in elements of his own life, such as his son’s brush with death that energized him to make a difference to the Earth.

Terry Gross of NPR’s Fresh Air in­ter­viewed Al Gore the other day: listen to the interview or read the transcript.

Former Vice President AL GORE (Author, "An In­con­ve­nient Truth"): Well, Terry, I think there are several reasons. First, it’s a complex issue. When you boil it all down, it’s fairly simple, but it does have a lot of moving parts. And the complexity by itself is an obstacle. Secondly, there’s a natural tendency to avoid thinking about the subjects that might involve some psychic pain, and the idea that human civ­i­liza­tion is colliding with the earth’s en­vi­ron­ment is a painful reality. And, third, it’s a new reality. Nothing in our history or culture prepares us for the new reality, the new re­la­tion­ship between human civ­i­liza­tion and the planet’s ecosystem.

We’ve quadrupled our population globally in the last hundred years, and we’ve magnified the power of our tech­nolo­gies thousands of times over. And when you combine those two elements, 6.5 billion people times incredibly powerful ways of exploiting nature, and then you mix in a new philosophy of dis­count­ing the future con­se­quences of present actions, it produces this new collision, the most dangerous part of which is global warming. And so it’s hard to absorb it, but I think it is now beginning to sink in. I think people are coming to grips with it, and I’m actually becoming optimistic that we’re going to respond in time.

GROSS: You’ve traveled around different parts of the world looking at the symptoms of global warming. What’s the most disturbing thing that you’ve seen in those travels?

Vice Pres. GORE: The melting of the North Pole is one of the most urgent cat­a­stro­phes that should be prevented as quickly as we can convince people to act. It’s a fairly thin floating ice cap, and as you know, the Arctic and the Antarctic are very different. The Arctic is ocean surrounded by land while the Antarctic is land surrounded by ocean, and that makes all the difference in the thickness of the ice. It’s 10,000 feet thick in Antarctic and less than 10 feet thick in the Arctic. Much less now. We’ve lost 40 percent of it in the last 40 years. And when the ice there melts, there’s a dramatic change in the re­la­tion­ship of the surface of the Earth there to the sun. The ice reflects 90 percent of the incoming sun’s energy like a mirror. But the open seawater, after it melts, absorbs 90 percent. And that’s a phase change. It sets up a positive feedback loop that magnifies and speeds up the melting process.

And the North Polar ice cap is in grave danger now. And nearby the great ice mound of Greenland is under increasing pressure from growing tem­per­a­tures also. If that were to melt, it would–or to break up and slip into the sea, it would raise sea level 20 feet worldwide. The west Antarctic ice shelf, that’s on the other end of the planet, the other pole, is the part of Antarctica propped up against islands that allow it to be affected by the warming ocean but also allow it to raise sea level by 20 feet, again, if it melts or breaks off and slides into the ocean.

And these are the three areas that many scientists point to as affecting a so-called point of no return which we need to avoid because if we cross that point of no return, then the process of a downward spiral would be ir­re­triev­able. So we have to stop short of that.

Gore has written a companion book, which I’m going to order.

I’m not the only one who thinks it’s a great film. Roger Ebert gave it a 4-star review

What can you do? You can go see the film and you can take action.

This is something that (should) transcend politics and na­tion­al­i­ty. We are all going to be affected by climate change, for the worse.