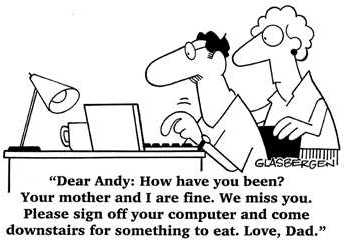 Email is addictive because of "operant con­di­tion­ing":

This means the mechanisms by which behaviour is shaped by its con­se­quences; how what we do depends on the rewards and pun­ish­ments of what we did last time. … The most effective training regime is one where you give the animal a reward only sometimes, and then only at random intervals. Animals trained like this, with what’s called a ‘variable interval re­in­force­ment schedule’, work harder for their rewards, and take longer to give up once all rewards for the behaviour is removed. There’s a logic to this. Although we might know that we’ve stopped rewarding the animal, it has got used to performing the behaviour and not getting the reward. Because ‘next time’ might always be the occasion that produces the reward, there’s never definite evidence that rewards have stopped altogether.

…-Checking email is a behaviour that has variable interval re­in­force­ment. Sometimes, but not everytime, the behaviour produces a reward. Everyone loves to get an email from a friend, or some good news, or even an amusing web link. Sometimes checking your email will get you one of these rewards. And because you can never tell which time you check will produce the reward, checking all the time is reinforced, even if most of the time checking your email turns out to have been pointless.

So what to do about it?

If a behaviour isn’t rewarded then it will gradually disappear. The problem is that we don’t want to remove the reward (email), so we need, instead, to weaken the strength of the link between the action and the reward. A simple delay would do this - imagine a five minute delay between hitting the check email button and getting new email. A delay is doubly-effective because the longer the delay the more likely you are to have email and so the more consistent the reward will be.

I didn’t find any sug­ges­tions that were par­tic­u­lar­ly effective, however.

I’m not addicted to email, per se. I can however surf the web endlessly. There’s always one more fas­ci­nat­ing link to follow.