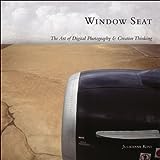 Julieanne Kost, a Photoshop evangelist for Adobe, flies 200 days a year. For the last five years, she’s been taking photos out of airplane windows.

This book is part pretty pictures, part a meditation on creativity, and part a Photoshop tutorial.

It is said that a picture is worth a thousand words. That must be why the word count is so low. In the first 120 pages, there are eight pages of text on creativity, and one page of text for each of the following seven chapters. The book concludes with twelve pages of text in an appendix on Imaging Techniques, a high-speed in­tro­duc­tion to photo ma­nip­u­la­tion in Photoshop.

The rest of the book is pictures. Pictures of clouds, pictures of fields, of mountains, of the sea, pictures of sunrises and sunsets. Great photos, even if the subject matter is a little repetitive.

The appendix shows several examples of before-and-after shots, and she’s worked some wonders, though you’d expect no less from a Photoshop Evangelist.

Ultimately, the book is un­sat­is­fy­ing. Both the creativity and the Photoshop sections are too cursory to be of much value. It is more successful as a book of pho­tographs, but I would have ap­pre­ci­at­ed more commentary on the photos themselves. Why choose this one? What caught her eye in the first place? The choices of com­po­si­tion and cropping. What worked, what didn’t.