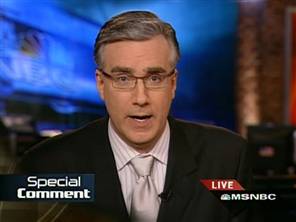 Keith Olbermann was on fire tonight, condemning the insanity of escalating a lost war that the American public so clearly wants no more of.

Only this president could look out over a vista of 3,008 dead and 22,834 wounded in Iraq, and finally say, “Where mistakes have been made, the re­spon­si­bil­i­ty rests with me” — only to follow that by proposing to repeat the identical mistake … in Iran.

And yet — without any au­tho­riza­tion from the public, which spoke so loudly and clearly to you in November’s elections — without any con­sul­ta­tion with a Congress (in which key members of your own party, including Sens. Sam Brownback, Norm Coleman and Chuck Hagel, are fleeing for higher ground) — without any awareness that you are doing exactly the opposite of what Baker-Hamilton urged you to do — you seem to be ready to make an open-ended commitment (on America’s behalf) to do whatever you want, in Iran.

The lives of 21,500 more Americans endangered, to give “breathing space” to a government that just turned the first and perhaps the most sober act of any democracy — the capital punishment of an ousted dictator — into a vengeance lynching so barbaric and so lacking in the solem­ni­ties necessary for credible authority, that it might have offended the Ku Klux Klan of the 19th century.

Before Mr. Bush was elected, he said nation-building was wrong for America.

Now he says it is vital.

He said he would never put U.S. troops under foreign control.

Last night he promised to embed them in Iraqi units.

He told us about WMD.

He has told us the war is necessary:

Because Saddam was a material threat.

Because of Osama Bin Laden. Al-Qaida. Terrorism in general.

To liberate Iraq. To spread freedom. To spread Democracy. To prevent terrorism by gas price increases.

Because this was a guy who tried to kill his dad.

In advocating and pros­e­cut­ing this war he passed on a chance to get Abu Musab Al-Zarqawi.

To get Muqtada Al-Sadr. To get Bin Laden.

He sent in fewer troops than the generals told him to. He ordered the Iraqi army disbanded and the Iraqi government “de-Baathified.”

He short-changed Iraqi training. He neglected to plan for widespread looting. He did not anticipate sectarian violence.

He sent in troops without life-saving equipment. He gave jobs to foreign con­trac­tors, and not Iraqis. He staffed U.S. positions there, based on par­ti­san­ship, not pro­fes­sion­al­ism.

He and his government told us: America had prevailed, mission ac­com­plished, the resistance was in its last throes.

He has insisted it’s up to the generals, and then removed some of the generals who said more troops would not be necessary.

He has trumpeted the turning points:

He has assured us: We would be greeted as liberators — with flowers;

He told us the enemy was al-Qaida, foreign fighters, terrorists, Baathists, and now Iran and Syria.

He told us the war would pay for itself. It would cost $1.7 billion. $100 billion. $400 billion. Half a trillion. Last night’s speech alone cost another $6 billion.

And after all of that, now it is his cred­i­bil­i­ty versus that of generals, diplomats, allies, Democrats, Re­pub­li­cans, the Iraq Study Group, past presidents, voters last November and the majority of the American people.

Oh, and one more to add, tonight: Oceania has always been at war with East Asia.

Mr. Bush, this is madness.

You are losing the cred­i­bil­i­ty, not just of your presidency, but more im­por­tant­ly of the office itself.

This becomes your legacy, sir: How many of those you addressed last night as your “fellow citizens” you just sent to their deaths.

So the next president has to pull the survivors out of Iraq instead of you?

Bush sent troops into an Iranian consulate in Iraq last night, invading the sovereign territory of Iran. Is he trying to provoke Iran into a war too? How does he propose to fight it? Is he trying to bring on the end times?