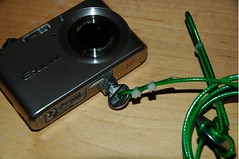 I recently learned about string pods and chain pods. In essence, they are pocket-sized monopods. You screw a six-foot string into the tripod socket of your camera, step on the other end of the string, and pull it taut. The tension on the string reduces camera shake. 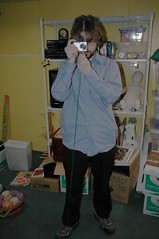 My string pod tutorial shows how I made the string pod, as well as some before and after shots.

Before now, I used to try to find a handy surface or wall to brace the camera, when taking photos without flash. Often there isn’t such a surface. I have a little 3-inch pocket tripod that I carry with me all the time, but I haven’t used it much.

A Flick thread on low-light, no flash, hand-held pho­tog­ra­phy makes several good sug­ges­tions. The best is to set the 2-second timer, which gives the camera a chance to stabilize after pressing the trigger.