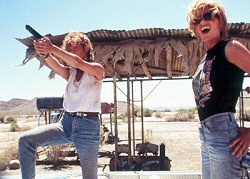 I’m slightly more hopeful this week about not Attacking Iran after reading this piece, subtitled Thelma and Louise Im­pe­ri­al­ism.

You only have to pick up the morning paper to find the most mainstream of official types in an over-the-top mode that, bare months ago, would have been confined to the distant pe­riph­eries of political argument. There’s Senator Joe Biden, the very definition of a mainstream man, grilling Secretary of State Con­doleez­za Rice about whether she believes the ad­min­is­tra­tion already has the authority to attack Iran and swearing, if she does, that it "will generate a con­sti­tu­tion­al con­fronta­tion in the Senate, I predict to you." (You can add the ex­cla­ma­tion point to that comment or to similar ones from the likes of Senators James Webb and Chuck Hagel among others.)

Former officials are now crawling out of the Washington woodwork to denounce Bush/Cheney policy in Iraq and Iran with the fervor (however masked by official Washington language) of an exorcism.

But it took more than [the work of Sy Hersh, Ray McGovern, and others] for so much of official Washington to panic. It took the ad­min­is­tra­tion’s decision to send the USS John C. Stennis, a second aircraft carrier task force into the Persian Gulf (with hints that a third could follow); it took the an­nounce­ment of what Juan Cole has termed George Bush’s "fatwa," allowing the U.S. military to take out Iranian agents anywhere in Iraq ("An­nounc­ing open hunting season on all Iranian visitors to Iraq," Cole wrote, "is like playing Frisbee with ni­tro­glyc­erin. Bush has gone looking for trouble and is likely to find it…"); it took the detention by U.S. forces of various Iranian officials in Iraq and the invasion of an Iranian office in Irbil in Iraqi Kurdistan; …

So feel free to imitate official Washington. Be scared, very scared. An attack on Iran, if it were to happen, promises a special mixture of two fun­da­men­talisms deeply engrained in our top political and military officials that may, in the end, combine into a single lethal brew – and that will, in the bargain, give American policy in the Middle East the full-blown look of a war on Islam. Though our President is a Christian fun­da­men­tal­ist, neither of these Washington fun­da­men­talisms are, in the normal sense, religious or par­tic­u­lar­ly Christian.