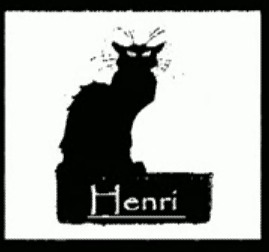 It’s been too long since I last posted an Odds & Ends.

Henri is a very amusing short spoof of French ennui.

Back in January, Emma and I were being repeatedly shocked by static elec­tric­i­ty. We would in­ad­ver­tent­ly discharge by kissing or otherwise touching each other, or by touching laptops or faucets. Eventually, I realised that it was due to a com­bi­na­tion of the microfiber upholstery on our new couch and the dry, unhumid air. We solved it by a com­bi­na­tion of rubbing an anti-static dryer sheet (Bounce) on the couch and buying a humidifier. That led to a spate of jokes about the spark being gone.

It’s started coming back again. I think it’s time to fondle the couch with more Bounce.

The Bad Sex Awards are, perhaps, Britain’s "most dreaded literary prize". Read about the 2007 Bad Sex nominees in the Guardian, with excerpts. The late Norman Mailer won posthu­mous­ly

Ian Welsh makes a case that it’s not your money, in rebuttal to anti-tax lib­er­tar­i­ans.

Regarding the Spitzer pros­ti­tu­tion scandal: normally, I would have given a Democratic politician the benefit of the doubt for a sex scandal. After all, unlike the Re­pub­li­can­s—see Larry ‘wide stance’ Craig; David ‘Diaper’ Vitter (brother of my former professor at Brown, Jeff); Mark Foley, et al—De­mo­c­ra­t­ic politi­cians generally don’t make a big deal of “family values”. Spitzer had done a good job of fighting corruption, but breaking up pros­ti­tu­tion rings had also been one of his signature issues, as had pros­e­cut­ing johns. The whole thing bespeaks such massive stupidity and hypocrisy that I say good riddance to him.

Several of us went to see Barack Obama at Key Arena last month (photos here), the day before the Washington state primary. The crowd more than filled Key Arena, with at least 20,000 in attendance. We ended up outside, as you can see from the photos, which actually served us well, as Obama stood outside and talked to the crowd for a few minutes before heading into the stadium. We got closer to him than we would have inside.

Anyway, John McCain spoke at the Westin Hotel that evening and only managed to half-fill the ballroom, which ac­com­mo­dates 800 people. In other words, the then-pre­sump­tive Republican nominee could only pull as many people as attended my caucus the next day. There are hundreds of thousands of Re­pub­li­cans within an hour’s drive of Seattle, but only a few hundred of them could summon the enthusiasm to see their guy in person.

I thought our caucus went well. I helped the convener organize the whole event for eight precincts. As the Precinct Committee Officer (PCO) for SEA 11-1945, I chaired our precinct’s caucus and was elected as a delegate for Obama, which means that I will be attending the 11th Leg­isla­tive District and the King County con­ven­tions next month. I have no intention of trying to proceed further. I don’t want to go to the Democratic National Convention in Denver in August.