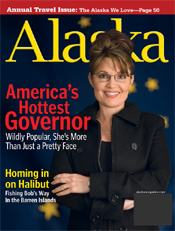 After months of attacking Obama’s “in­ex­pe­ri­ence”, McCain has picked an unknown first-term governor from a minor state with an un­der­whelm­ing resume.

What gross ir­re­spon­si­bil­i­ty! A seventy-two-year-old with a history of skin cancer, who feels the need to keep his medical records under a tight wrap, should have a running mate who’s ready to take over at any time. When you compare her to Biden or Obama, Palin clearly isn’t. I sincerely believe that I’m better informed about the world than she is, based on reports of her lack of interest in Iraq until recently, and that she didn’t have a passport until 2007.

What she does bring to the ticket is hard-right, cre­ation­ist, evan­gel­i­cal cred­i­bil­i­ty. (MoveOn and Digby have more.)

The other thing that she brings is her looks. Most people’s very first impression of her is going to be some variant of "Wow! She’s hot!" Sur­pris­ing­ly—or perhaps not—almost all of the serious political commentary that I’ve read over the last couple of days has avoided mentioning this.

Some people will un­doubt­ed­ly vote for McCain now because there’s an attractive woman on the ticket. Others will re­flex­ive­ly dismiss her as a Barbie doll because of her looks. I think it’ll both help and hurt McCain. Help, because sex sells. Hurt, because her fresh face will remind voters how old McCain is.

Personally, I’d much rather vote for Michael Palin, but he’s not running — or eligible. I’m sticking with Obama.