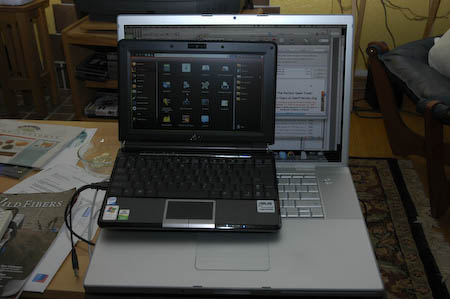 I’ve been very happy with my MacBook Pro. It’s my primary home machine, sitting on the living room coffee table, and getting far more use than the desktop system in my office upstairs.

But it rarely leaves the house. It’s big–a 17" screen–and it’s heavy. I seldom carry it anywhere and I hardly ever bring it to a coffee shop.

The Eee came with Windows XP Home. I im­me­di­ate­ly repar­ti­tioned it and put Ubuntu Eee on the second partition. I don’t think I’ve booted back into Windows after the first few days. All the devices (webcam, sound) and apps (Skype, Flash) work and I have all the Ubuntu goodness, optimized for this form factor, instead of a seven-year-old operating system.

The keyboard is adequate for my slender hands, though I would not care to do a lot of writing on it. The main problem that I continue to have with it is the placement of the right-hand Shift key, to the right of the Up-arrow key. My touch-typing fingers expect to find Shift beside the /, dammit.

The Elantech trackpad drove me nuts initially. Under both XP and Ubuntu Eee, it’s configured with all kinds of multitouch gestures. Far too often, I in­ad­ver­tent­ly clicked or selected merely by hovering over the trackpad while typing. With some pain (especially on Ubuntu), I figured out how to turn all that crap off, so that it merely moves the mouse around and the right edge scrolls.

The screen is a little too small at 1024x600. The Netbook Remix interface replaces the GNOME desktop with a custom launcher. Each window runs maximized by default with minimal trimmings.

For a low-power machine, it’s sur­pris­ing­ly fast. The Atom has two cores, so even if one is maxed out, the other one keeps the machine responsive. 1GB has been sufficient so far, but I’ll probably get a 2GB stick because RAM is cheap.

I’m very pleased with the Eee. It nicely com­ple­ments my MacBook.