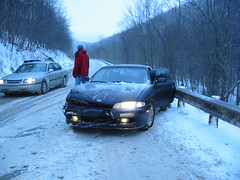 It snowed in Seattle yesterday. We drove over to Sammamish last night to my CEO’s house for the Holiday Party. The snow wasn’t sticking to the roads, so although visibility wasn’t great, getting there and back was not difficult.

It was cold today and colder tonight. I saw only a light dusting of snow fall today, but the snow that was melting earlier has refrozen.

We had to go out this evening, over to Burien to see Frank. The main roads were fine, but we had a slightly alarming descent on a hill near us as we headed over there. Coming home, we had a couple of unpleasant minutes trying to get up a hill near Frank’s. The wheels spun and spun, but the car wouldn’t go forward. Several times, I de­lib­er­ate­ly let it slide backwards a few feet, hoping to find some traction further down. In the end, that worked.

I don’t much like snow, but I hate ice. I hate walking on ice. I hate the lack of control. I’m always fearful that I’ll slip and fall, that my feet will fly from under me and that I’ll crack my head. Or that I’ll break an arm when I try to break my fall.

I hate driving on icy roads. The skidding. The un­con­trolled drift. The wheels spinning.

That’s why I live in a climate where we don’t get a lot of snow or ice.