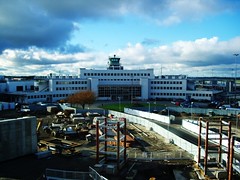 Normally, we have Shuttle Express take us to Sea-Tac airport, but they were completely booked up when I tried to make a reser­va­tion earlier in the week. Lyndol very kindly came over at 6am and drove us down to the airport.

Our plane left an hour late from Seattle, as it came in late the night before and the crew had to wait for the statutory FTC minimum stopover. The late departure from Seatac was no problem, since we had a scheduled 5-hour layover in Philadelpia. After being shoehorned into the plane, we needed to stretch and wandered through several of the terminals. The only excitement was when I realized an hour before leaving that I had mislaid a credit card in another terminal. Luckily the restaurant was still open and had found the card.

Our second flight was also delayed, so we got to Dublin an hour late. We were very tired and spent the afternoon sleeping. Back to bed soon.

If Baby Bowles has not yet put in an appearance, we’re going over to Michelle’s tomorrow afternoon, to see her and her new house.