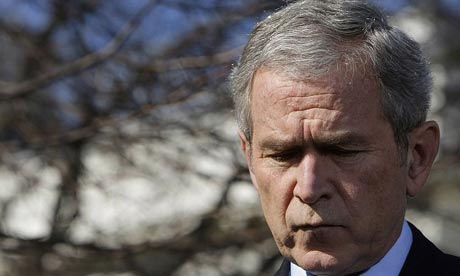 Last Sunday President-elect Barack Obama was asked whether he would seek an in­ves­ti­ga­tion of possible crimes by the Bush ad­min­is­tra­tion. “I don’t believe that anybody is above the law,” he responded, but “we need to look forward as opposed to looking backwards.”

I’m sorry, but if we don’t have an inquest into what happened during the Bush years — and nearly everyone has taken Mr. Obama’s remarks to mean that we won’t — this means that those who hold power are indeed above the law because they don’t face any con­se­quences if they abuse their power.

There’s much, much more. By my count, at least six important government agencies ex­pe­ri­enced major scandals over the past eight years — in most cases, scandals that were never properly in­ves­ti­gat­ed. And then there was the biggest scandal of all: Does anyone seriously doubt that the Bush ad­min­is­tra­tion de­lib­er­ate­ly misled the nation into invading Iraq?

Why, then, shouldn’t we have an official inquiry into abuses during the Bush years?

Now, it’s true that a serious in­ves­ti­ga­tion of Bush-era abuses would make Washington an un­com­fort­able place, both for those who abused power and those who acted as their enablers or apologists. And these people have a lot of friends. But the price of protecting their comfort would be high: If we whitewash the abuses of the past eight years, we’ll guarantee that they will happen again.

The Democrats, with rare exceptions like Conyers and Kucinich, have shown no appetite for holding the Bush Ad­min­is­tra­tion ac­count­able. Between starting the Iraq War, torture, billions given in no-bid contracts, Katrina, the U.S. Attorneys’ firings, wire­tap­ping U.S. citizens, and much, much more, there’s a lot that needs in­ves­ti­gat­ing. And surely there’s more that hasn’t come to light yet.

Letting bygones be bygones just condones the crimes. It will certainly be po­lit­i­cal­ly in­con­ve­nient to have some ac­count­abil­i­ty, but it’s the right thing to do.

I’m not going to hold my breath, however.