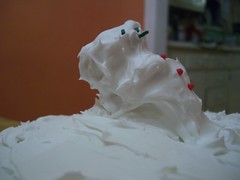 I made royal icing last night for the Christmas Cake to put over the marzipan. A very tedious half hour with an electric handheld mixer to beat the egg whites until they were stiff, and then beat in the powdered sugar.

I had drizzled whiskey over the cake several times to keep it moist. That was a mistake. The cake turned out to be quite damp.

Before baking the cake in November, I had also thoroughly soaked the dried fruit for a couple of days in hot water and whiskey. The fruit was very plump, but with hindsight, I think I should have thoroughly drained the soaked fruit for some hours.

Still, it tastes good, but it could be better.