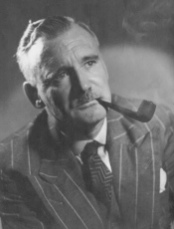 I knew three of my grand­par­ents; they all died after I reached adulthood. My mother’s father, George Victor Clery, died 12 days before I was born, on March 3rd, 1965. I was to be named Vincent after my father, [Charles] Vincent Reilly. Instead, I was christened George Vincent Reilly. I was the first grandchild for both the Clerys and the Reillys. I think I must have been a welcome dis­trac­tion.

Ironically, my parents had gotten married on his birthday, March 30th, the previous year, and he didn’t live to celebrate their first an­niver­sary. The timing was partly in his honor and partly because it was Easter Monday. Catholics were not allowed to marry in Lent then.

I only know the man by repute. He worked, like many in his family, in a bank. His word was law in his household, but my mother adored him. He was very sociable: he’d invite clients to lunch in the bankhouse at the drop of a hat and my grand­moth­er would have to figure out to feed them. His mother was told that he’d not live beyond infancy and his health was poor all of his life, but he was no hypochon­dri­ac. I see something of him in my uncles, Dick and Gabriel. Certainly the face and the moustache; also the gruffness.