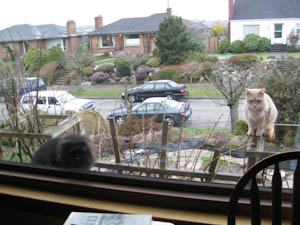 We were watching An Engineer’s Guide to Cats on YouTube when I looked out the front window and spotted these two looking in. They climbed up the six-foot gooseberry frames to the windowsill.

Meet Whiskey and Guinness, from next door. They think they own the place. When it’s hot in the summer, they’ve been known to stroll in and wander around our living room—while we’re in it.

I left the back door open for a few minutes one Saturday morning, while packing the car. I came back in and found Whiskey just inside the back room. He scarpered when I yelled at him and I slammed the door behind him. It was then that I discovered that Guinness was now locked in. He tore past me, to get out the back door. He couldn’t, so he tried to climb up and over the venetian blind. He got to the top before he realized that wasn’t going to work either. Down he dropped from the ruined blind and back into the living room with him. I opened the door wide and stamped into the living room from the other side to drive him out.

Cheeky buggers. Almost as cheeky as the racoon who climbed up the gooseberry frames one night. We looked out to see a face staring in at us, startling us. We stepped outside with a flashlight and yelled at him, but he was quite reluctant to go.