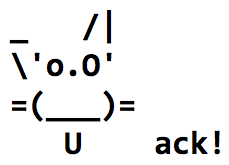 On a Stack­Over­flow question about favorite Vim plugins, I learned about Ack, a re­place­ment for grep that’s smarter about searching source trees.

Ack is written in Perl. The built-in :vimgrep is rather slow. It seems to have some Vim-specific overhead, such as creating swap files and executing BufRead autocmds. Ack is noticeably faster, though somewhat slower than GNU grep.

Which would you rather type to search a tree, ignoring the .svn and .git subtrees?

The ack takes 6 seconds to search 4500 files, while the grep completes in 2. This does not count the time that I spent trying to figure out the correct syntax and argument quoting for --exclude. The help says both --regexp=PATTERN and --exclude=PATTERN, but the latter is a glob (file wildcard pattern).

On Windows, I wrapped ack with pl2bat.