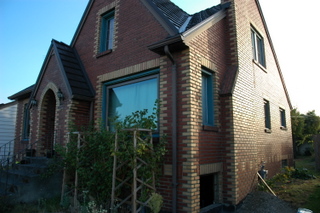 There’s a house for sale a few doors down that’s very like ours. We snooped around on Sunday during the open house.

Our house was built in 1931; the other, the year before. Ours is slightly deeper, but the floor plans are very similar. Theirs has no eye­catch­ing yellow brick trim. Our kitchen was remodeled in the sixties, taking over part of the next room. Theirs never was and it’s tiny. Our basement is half finished and it had a bathroom added in the seventies. Their basement is unfinished. Our dormers upstairs are walk-in closets; their dormers are unfinished attic. Our living room and dining room windows were replaced with picture windows, while they still have leaded panes.

Dark wood trim pre­dom­i­nates in their house, the electrical outlets and light switches look like the originals, and the paintwork was shabby. In short, it had changed little in the eight decades since it was built.

Quite an eerie experience, seeing our house much as it started out.