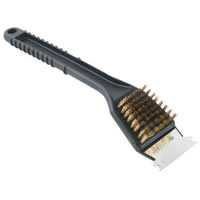 In Seattle, it is said that moss grows on the north side of the rain. To be sure, moss thrives in the shadier parts of our yard.

On a cold, dry February day, I rented a pressure washer with the intention of scouring the moss from the ground and the flaking paint from the garage walls. Although it was quite effective at removing moss, it made a godawful mess. There were muddy flecks of moss everywhere. Against the flaking paint, it made little impression and I still have to deal with that. I had dealt with perhaps a third of the moss when the pressure washer died. I got a partial refund, but didn’t feel like renting another one.

The following weekend, I scraped up more moss with a shovel. Not messy, but not wholly effective either, leaving small, low patches of moss that are starting to return.

Today, I took on the exterior basement stairs. They are always in shade and the moss carpeted the steps. I used an old grill brush that had grown too foul with grease to be used on the grill. It did an excellent job; I’ve never seen those steps look so clean. The scraper peeled most of the moss off the ground and the brass bristles ripped up the roots with ease.