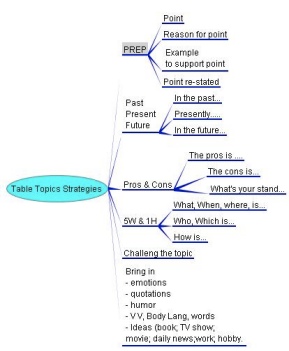 Table Topics offer a chance for those present to wing it on some topic for one or two minutes. The Table Topics Master sets up the topics and the speaker has as most a few minutes to prepare.

Sometimes, when I’m running Table Topics, I present a topic for everyone at the beginning of the section. On a winter’s day, I might ask people to tell us about some favorite food they associate with winter. Or I might ask them to tell us about where they’re going for their summer vacation.

At other times, I spring the topic on the speaker after they’ve vol­un­teered. Tonight at Freely Speaking, I had two envelopes filled with slips of paper. One envelope had names of people, the other was some dastardly crime. I told them that they had to plead their case before a judge, the school principal, Oprah, or some court of opinion. Perhaps plead for mercy or maybe proclaim their innocence.

Miranda opened as Joan Crawford, pla­gia­riz­ing her assignment from the Internet, and skilfully evaded the question by channeling Mother Dearest on the rampage. Phil was Bill Gates, swindling old ladies with a crooked version of Windows. Barry was an arrogant Mr. Spock, who did 90mph in a 40mph zone in his spaceship. John was on his knees as Charlie Brown, pa­thet­i­cal­ly denying that he beat up the small kids for their lunch money. Guillaume spoke as Dorothy who had dreamt of blowing the Three Little Pigs’ house down and waking to find her own house flattened by a tornado. Kim explained away Sherlock Holmes, cheating at cards. Joe was Simon Cowell, claiming that being an in­suf­fer­able jerk helped toughen up American Idol com­peti­tors. Don was the CEO of AIG, on trial for tying the heroine to the train tracks, who thought it was ridiculous and that he should have been on trial for more serious crimes. Barb closed as Sarah Palin, who had pulled her little sister’s hair, an act of family values.