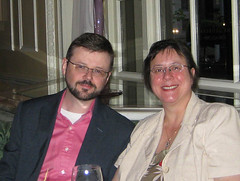 Emma turned 50 today. She was a mere (late) thirty-something when I met her.

We had dinner at The Georgian in the classic Fairmont Olympic hotel. Until a few years ago, it was the Four Seasons. The Georgian is in an old-fashioned dining room with soaring ceilings that mutes the con­ver­sa­tion. The waiters were attentive and made us feel welcome.

The food is not out­ra­geous­ly ex­pen­sive—we both chose to have the prix fixe dinner at $49. I had the wine for an additional $20. The pre­sen­ta­tion was superb and we both enjoyed the food. An asparagus salad, followed by chicken wrapped in apple-smoked bacon, and the black-and-white soufflé. Scallops were an al­ter­na­tive to the chicken, but didn’t appeal to either of us.

One week from today, our ninth wedding an­niver­sary.