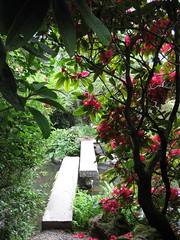 Kubota Garden is a little-known gem in the Rainier Beach area of south Seattle. Twenty acres of hills and valleys in a Japanese style.

Emma and I met Lyndol down there this morning and rambled through the garden for two hours. It was a fine, overcast day, with tem­per­a­tures in the low 60s and occasional driz­zle—and a pleasant relief from the record heat of earlier this week. I had visited there before: it’s at the far end of the Chief Sealth bicycle trail. Lyn had too, but it was Emma’s first visit.

The gate was locked when we arrived at 10:30, though the sign proclaimed that it was open from 6am until sunset. We walked in anyway. It was still locked when we left, but a few others also found their way in.

We climbed up the “Moun­tain­sid­e” to the top of the turned-off waterfall, we crossed all the bridges, we found Mapes Creek. Fujitaro Kubota bought swampland in 1927, but most of it has been drained since.

I resisted the urge to take photos for about half an hour, but a grove of twisted trees compelled me to whip my point-and-shoot off my belt. The best photos can be found at Flickr.