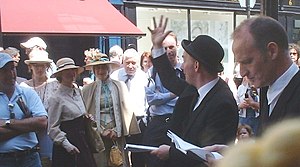 Today, June 16th, is the actual Bloomsday. For expediency, we in the Wild Geese Players usually perform our reading at the nearest weekend.

The Irish Times writes its usual report of a crowd of posers re-enacting fragments of Ulysses in Dublin. Perhaps the best line:

Back in the city centre, a sign outside Davy Byrne’s advertised a Bloomsday special: Gorgonzola cheese sandwiches and burgundy for €12.90. Someone nearby complained loudly that prices had gone up since 1904.

A Spanish translator of Ulysses remarked:

“You don’t have to be a Joycean to enjoy this day,” he said. “It’s wonderful to see literature taking over the city and there are lots of ordinary people, not just scholars.

“That’s a very Joycean act. Yes, he’s difficult and demanding to read, but look around you, and see how people have responded to him. That’s what happens when you capture the soul of a people.”

Colum McCann had his own take on Bloomsday in the New York Times:

Soon my grand­fa­ther was emerging from the novel. The further I went in, the more complex he got. The man whom I had met only once was becoming flesh and blood through the pages of a fiction. After all, he had walked the very same streets of Dublin, on the same day as Leopold Bloom. I began to see my grand­fa­ther outside Dlugacz’s butcher shop, his hat cocked sideways, watching the moving “hams” of a young girl. I wondered if he had a penchant for “the inner organs of beasts and fowls.” I heard him arguing with the Citizen in Barney Kiernan’s pub. I felt him mourn the loss of a child.

Vladimir Nabokov once said that the purpose of sto­ry­telling is “to portray ordinary objects as they will be reflected in the kindly mirrors of future times; to find in the objects around us the fragrant tenderness that only posterity will discern and appreciate in far-off times when every trifle of our plain everyday life will become exquisite and festive in its own right: the times when a man who might put on the most ordinary jacket of today will be dressed up for an elegant masquerade.”