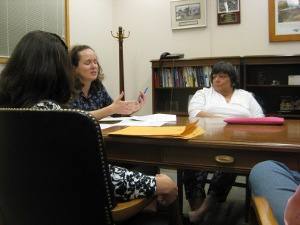 Today, I did something that I’ve never done before. I visited my US Senators’ offices, with a handful of others, to help stiffen their spines on healthcare reform.

It started by accident last night when Mira mentioned on Facebook that she was going to visit Rep. Jim McDermott, Sen. Maria Cantwell, and Sen. Patty Murray’s Seattle offices today to talk to them about the “public option”.

McDermott and Murray were already supporters of the public health insurance option. Cantwell’s position was murkier and she came out in favor of some kind of lame “co-op” compromise earlier this week. Mira and her friends had no difficulty in setting up meetings with McDermott and Murray, but Cantwell’s office refused to schedule a meeting.

I joined them at the Jackson Federal Building, where both Senators have their Seattle offices, after they had already met with one of Jim Mc­Der­mot­t’s aides. That had gone so well that they had difficulty in tearing themselves away in time.

We went to Maria Cantwell’s office first, where we spent ten minutes in an un­sat­is­fac­to­ry exchange with the staff at the front desk, who wouldn’t commit to anything more than passing on comment forms. As we were leaving, her State Director, Chris Endresen, came out of the ladies’ restroom asked us what brought us there, and invited us in for 15 minutes.

Ms. Endresen’s position was that Senator Cantwell is a policy wonk, who is working hard on various health-related bills. We were very clear that we were all in favor of healthcare reform and the public option, and would like to see Maria take a lead on it. Moreover, polls indicate that 72% of the public feel similarly. The aide remained non-committal, though she did tell us to look out for an op-ed next week from Maria, outlining her position.

We went downstairs to Patty Murray’s office, where we had an ap­point­ment with Mary Conroy, one of her aides. She has been working on healthcare issues for nine years and sees this summer as a major op­por­tu­ni­ty. There are two bills being developed in the Senate, one from the HELP Committee, the other from the Finance Committee. Murray sits on the former, Cantwell on the latter, so Washington State has more influence than most.

We asked Mary what we as ordinary grassroots activists could do, and she told us that Washington CAN had been taking the lead locally, that they had done good work with rounding up small business owners to advocate for healthcare reform and tell their own stories. We told her some of our stories.

One woman said she had been unemployed for 18 months, that she could no longer afford COBRA, that she would fall apart without her depression medication, and for now she had managed to get a year-long grant paying for that medication from a phar­ma­ceu­ti­cal foundation. Paul said that only yesterday his wife had been diagnosed with a heart murmur. She’s thinking of changing jobs and that would constitute a “pre-existing condition“. He had thought of starting a business a few times, but that the cost of providing health insurance had always been a huge obstacle. Isn’t it ironic that America venerates small businesses, but makes it so difficult to start them? Will mentioned a friend of his in France who’s a “health­care exile”. His friend is a self-employed consultant who works on con­sti­tu­tion­al issues with countries like Bosnia. He’s also a diabetic who would find it difficult and expensive to get good insurance in the US. And I mentioned that my wife’s health is poor and that she has not been well enough to work this year. We have insurance through my job, but were I to lose my job, health insurance would be a big worry. (Some recent COBRA change that I hadn’t heard of seems to partially mitigate this.)

Mary also referred us to the Herndon Alliance who have been doing good work on framing the issues around healthcare reform. She said that the main tactic of those who oppose reform is more subtle than the Harry and Louise ads of 1993. They are playing for time and urging more study, in the hopes of making us lose momentum. There’s about two more months before whatever bills are written get locked down.

Anyway, we spent an hour there and felt far more welcomed than we had been at Maria Cantwell’s office. Night and day.

Next stop: look more closely at Washington CAN.