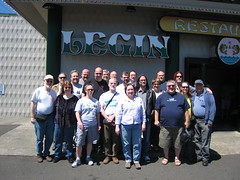 Barely a month ago, while cleaning up Frank Maloney’s Facebook account, I became aware of Portland Motsscon XXII.

I discovered the soc.motss newsgroup back in 1989, when I arrived in America as a grad student at Brown and had steady access to Usenet. MOTSS = members of the same sex, an opaque euphemism for gay attraction, which helped the group be created with a minimum of fuss in 1983.

I lurked on soc.motss for two years. I knew that I was bisexual, but I wasn’t ready to admit it to anyone. Then my friend Éamonn came out as gay and I promptly came out to him. After a few months of foot­drag­ging, I came out on soc.motss and became a regular par­tic­i­pant on the group.

Frank was a mainstay of soc.motss. He was the first person that I looked up when I moved to Seattle in 1992; we promptly became fast friends.

I went to three of the annual con­ven­tions, the motsscons: Portland in 1992, Las Vegas in 1994, and Washington DC in 1995. I had affairs at a couple of those cons, first with Ry, later with Alan. Cons were big in the heyday of soc.motss: seventy to a hundred or more people attended them.

Soc.motss itself was big and noisy in the early to mid-90s, as hordes of people got dialup access to the Internet. I recall that there being more than 100 messages per day, with several hundred active and semi-active posters.

By the late 90s, things had changed. The Usenet newsgroups were in massive decline, with everyone moving to the Web. My own life had become busier. I was back at Microsoft; I was trying to write Beginning ATL COM Pro­gram­ming, while undergoing a half-year death march to ship IIS 4; and I had fallen in love with Emma. I gradually stopped reading the newsgroups, though soc.motss was among the last that I gave up.

I looked in a few times over the following decade and Frank would tell me news from soc.motss once in a while, since he continued to par­tic­i­pate until his death. Over the past year, I resumed contact with several motssers on Facebook, where most of the soc.motss community seems to hang out now, and that was good.

So, when I learned that this year’s motsscon was to be in Portland again, I was tempted but a little wary after my long absence. I also had com­mit­ments, since it coincided with Seattle’s Pride, last weekend. I thought about it for ten days and decided that I really wanted to go. I told BiNet Seattle that I couldn’t march and Freely Speaking Toast­mas­ters that I couldn’t staff our table.

The con started on Thursday evening with a foodie dinner at Sel Gris. On Friday, the con goers drove along the Columbia to see the waterfalls. I worked on Friday and took the evening train down from Seattle. Alan collected me at the station and brought me to the Mark Spencer hotel, where we shared a room for the weekend. We joined the party in the basement about 10 o’clock after several people had gotten to bed.

This con was much smaller than the ones I went to a decade and a half ago, about 25 people in all. All to the good in my opinion, as everyone could hang out with everyone else. I didn’t have the feeling of being lost in the crowd this time. I had a friendly warm reception, both from old friends not seen in years, and from people I hadn’t known before, even online. Everyone looked older and grayer of course; no surprise after 15 years. 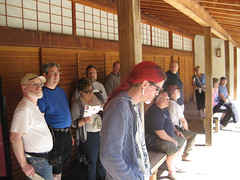 (This photo is one of the few moments when everyone had fallen silent. There was constant, convivial chatter.)

Saturday opened with a trip to the impressive Farmers’ Market, where Alan and I had breakfast and wandered for a little while. Alan headed off to Cannon Beach to a friend’s wedding. I made my own way to the Saturday Market on the river, where I found Rod, Chuk, Josh, and Jack, and I finally had a chance to talk to my compatriot Rod after all these years. We walked back together to the hotel.

I had signed up for Kathryn’s energetic hike on the grounds that this wasn’t a crowd of triath­letes and it wouldn’t be that energetic. But Max’s Steve had dropped out of the Segway trip, and after a couple of calls for someone to take the spot, I plumped to join the Segway trip. 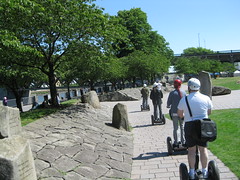 After lunch, ten of us assembled at the “undis­closed location”, a shabby parking lot near the Portland Opera, where we found a trailer full of Segways. While we broiled under the hot sun, the tour guides la­bo­ri­ous­ly filled out paperwork, making each of us inspect every nick and dent on our Segways, filled out credit card details and phoned them in, and provided disclaimer forms for us to sign. At last, we were instructed how to ride our Segway i2s. Some of us had ridden older models; I was a first-timer. It took a few minutes to get the hang of mounting and dis­mount­ing, but it quickly became natural. We had a half an hour of practice in the lot before heading out on our tour.

We headed north along the east side of the Willamette riverfront, crossed at the Steel Bridge, then went south on the other side of the river, past Saturday Market, down to River Drive, where we took a much-needed break, before retracing our route. Two hours it took us, two hours in the hot sun. I hadn’t adequately slathered myself in sun cream and came close to sunstroke. That aside, it was a blast, swooping around on the Segways, amidst the throngs on the riverfront. The tourguides had many op­por­tu­ni­ties to hand out leaflets. 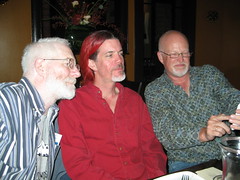 Back to the hotel to cool down and rest before dinner. A dozen of us ate at the Farm Cafe; the rest ate at the Blue Moon Tavern. All of us who ate at the Farm Cafe came away very satisfied. Their in­gre­di­ents were fresh and local, cooked expertly and presented well, in an agreeable atmosphere. I sat at one end of the table with Robert, Mike, and David.

Long after the other party left the Blue Moon, we finished our desserts and headed back to the Mark Spencer hotel, where we all hung out for the rest of the evening. Another sign of getting older: at earlier cons, a crowd would have headed out to the bars till the not-so-early hours. Tim and Mack said their goodbyes and slipped off. 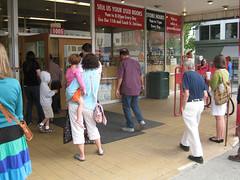 Come the morning and I still hadn’t got to Powell’s, even though it was only two blocks away. I realized that if I went there when it opened at 9am, I could spend nearly an hour there before I had to check out of my room and go to Dim Sum. I arrived at the moment they opened their doors and a crowd of 20 people swarmed in. The last time I was there, I bought a pile of mysteries. This time, I went for science fiction and fantasy, and came away with 15 or 20 books, mostly by authors I hadn’t tried before.

Off to Dim Sum at Legin, way out in the burbs. Apparently the good restau­rants have moved out of Chinatown. We crowded around two large tables and tucked in to an amazing amount of food for a very reasonable price. I sat between Rod and Kathryn and enjoyed their company very much. Ry came in for Dim Sum, but I only managed to talk to him for a brief time. He told me that he hated me for how well preserved I was; I told him that it was my revenge for being so damn babyfaced in my twenties.

Group photos were taken in front of Legin and we said goodbye to Rod, who had a lunchtime flight home.

Back to the hotel again to digest our brunch and rest up for a couple of hours before heading up to the Japanese Garden. I decided that I needed a caffeine fix and Sim ac­com­pa­nied me back to Powell’s, where we sat in the cafe and talked for half an hour. We spent a few minutes perusing the stacks. I was good this time and bought only one book. 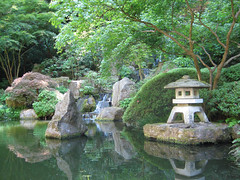 Kathryn persuaded several people that it was only a mile’s walk to the Japanese Garden. Almost two, according to Google Maps, much of it uphill, but I took the easy way, Alan’s car. It seemed like all of Portland had the same idea—we had to park half a mile uphill from the entrance.

Despite the crowds, the Japanese Garden was serene and shady and we ambled and chatted for more than an hour. I wore a long-sleeved shirt with the collar turned up to cover my sunburned neck and arms. I took the op­por­tu­ni­ty to introduce myself to the few remaining people who I didn’t know, Stephanie and Chris. After, we all headed down to the adjacent Rose Garden, where we wandered for a while.

Back to the hotel once more: the final time for me as I was catching the 6:15 train back to Seattle. I grabbed a sandwich at Kenny & Zuke’s across the street, and said goodbye to everyone at the hotel. Alan dropped me off at the train station then joined the others at Navarre’s for another much-acclaimed dinner.

I’ve acquired a number of new Facebook friends in the past week, everyone I think that I wasn’t already friending.

I’m extremely glad that I went. I enjoyed every minute of it. Unlike earlier cons, I never felt out of things. Partly this was due to maturity and better social skills on my part, but largely I think it was due to the smaller, friendlier group.

Emma declined to accompany me down, as she didn’t know anyone except Alan and thought she’d find it a strain to listen to lots of strangers rem­i­nisc­ing about unfamiliar events and people. It would have been, a little, but I’m sure she would have been welcomed.

Finally, my thanks to our hosts, Kathryn, David, and Chuk, for such a marvelous job and much hard work before and during the con.