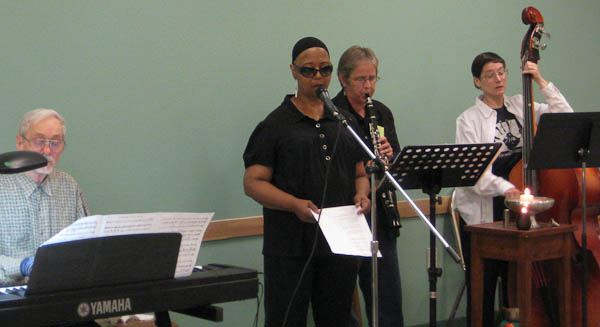 For weeks, Lyn has been telling us about the musical talk that he was going to give today at his UU con­gre­ga­tion about Billy Strayhorn, a little-known but talented composer, who col­lab­o­rat­ed for decades with Duke Ellington. Strayhorn was openly gay in the homophobic decades before Stonewall. That, coupled with his apparent liking for remaining in Elling­ton’s shadow, probably con­tributed to his obscurity.

Lyn talked about Billy Strayhorn and his life and music for half an hour. He also ac­com­pa­nied Shirley singing some Strayhorn songs on piano, as Linda and Marion played the clarinet and cello. He said that Stray­horn’s life gives rise to two questions, Do you know who you really are, and Are you living as that person.

He had been fretting about it beforehand, but it all came out fine.