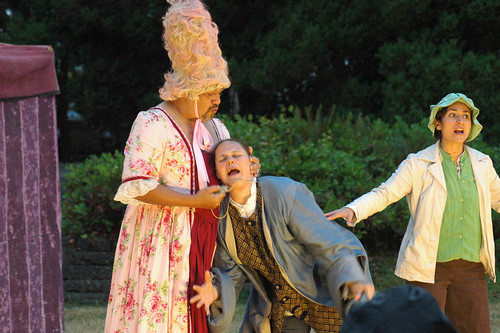 I mentioned three weeks ago that I was putting together a group of people to see Greenstage‘s production of Shake­speare’s Comedy of Errors at the Seward Park Am­phithe­ater. Six of us braved the rain last night, ate our picnic, and enjoyed an hour and a half of ribald slapstick.

Almost all of the cast cross-dressed. The main male parts, the two sets of identical twin brothers, were played by women, The wife, her sister, and the courtesan were played by ugly men in the best panto dame tradition.

The play, like so many of Shake­speare’s comedies, requires an endless series of confused identities, which could be cleared up in moments if only someone paused and said, “Wait a minute!”

Much running around, no subtlety, fun.

Seattle Shake­speare are also putting on free, outdoor pro­duc­tions of Shake­speare­an plays, Taming of the Shrew and Richard III. Both end on August 2nd, before we get back from Europe. Cathy saw their white trash production Taming yesterday and raved about it today.