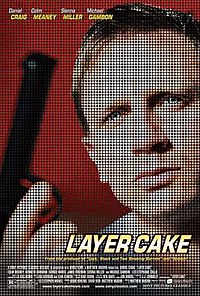 After reading Layer Cake earlier this week, I decided to rewatch the movie. The screenplay was written by J.J. Connolly, adapting his own novel. Although the convoluted plot has been much simplified and somewhat rearranged, it’s still complex and tricky to follow. Most of the humor is gone, as director Matthew Vaughn didn’t want to make Lock Stock III. It’s more of a straight thriller. The Cockney is toned down, making it easier for a non-UK audience. And Daniel Craig is somewhat older and calmer than the narrator of the book.

The film succeeds both in its own right and as an adaptation, though I prefer the book. It was Daniel Craig’s first starring role. He carries the story in his role of a coolly pro­fes­sion­al drug dealer whose world starts falling apart. The other characters are rather thin; only Colm Meaney and Michael Gambon have any heft.