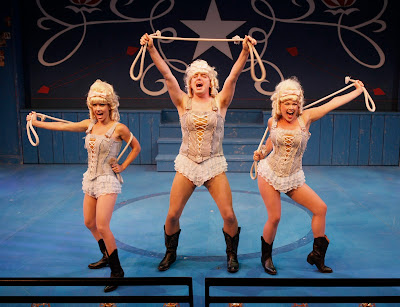 Das Barbecü is Wagner’s Ring Cycle trans­plant­ed to Texas for comic effect. We saw it at Seattle’s ACT Theatre tonight. The Ring Cycle is currently playing at the Seattle Opera, who com­mis­sioned Das Barbecü in 1991.

I’m no opera buff and certainly no Wagnerian. After sitting through four hours of Tristan und Isolde years ago—Ach du lieber Gott! Mein Arsch! Meinen Ohren!—I told Emma that my limit for opera was two-and-a-half hours. I have never seen any part of the Ring Cycle and had only cursory knowledge of the story, and it detracted not one whit from my enjoyment of Das Barbecü.

Wagner might have recognized his plot, refracted through a Texan prism, but not the music. This is a musical with a country flavor, not an opera. The plot is pre­pos­ter­ous, of course: Dallas meets D&D. Blame Wagner.

The cast—two men and three women, quick-change artists all—play a mul­ti­plic­i­ty of parts. They sing, they dance, they have great comic timing, and they brought the house to their feet.