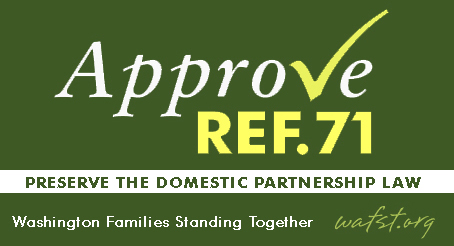 I spent 90 minutes phonebank­ing for Approve 71 after work today. I called voters who had already been identified as leaning pro­gres­sive and asked them to vote APPROVE on Referendum 71 in November.

Under the recent Domestic Part­ner­ship law (SB 5688 aka the “ev­ery­thing but marriage bill”), registered domestic partners (same-sex couples and opposite-sex couples with at least one partner over age 62), and married couples, are now treated equally under the law in all parts of Washington state.

The Religious Right objected and put together an initiative which scraped together just enough signatures to be on the ballot. They’ll be voting to REJECT the bill, which would overturn domestic part­ner­ships in this state.

Civil rights should not be subject to a vote. It’s important not to have a repeat of last year’s Propo­si­tion 8 debacle in California. It’s important to me personally and I’m putting time and money into the campaign.

If you want to join the effort, sign up at Approve71.org, and become a fan on Facebook.

Phonebank­ing will take place regularly in Seattle and other locations. In Seattle, it’s happening at the Equal Rights Washington offices at 7th & Columbia, beside the freeway offramp. If you have a laptop with Skype, bring it along.