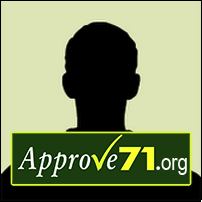 I’m breaking radio silence to explain the un­char­ac­ter­is­tic drought of blog posts. In my last post, I mentioned that I had created a Twibbon overlay for Approve71.org, allowing you to overlay Approve71‘s badge over your Twitter icon.

The next day I went over to Approve71’s head­quar­ters and introduced myself to the tech team, Josh, Joe, and Adam. One thing led to another, and I spent that weekend writing my first-ever PHP code, which allowed you to upload a photo to Approve71’s website, stamp a banner on it, and then save it so that you could sub­se­quent­ly upload it to Facebook for your profile picture.

It’s been a big success, used a couple of thousand times.

Since then, I spent a lot of time working on a second version, which lets you crop the photo (using im­gAr­eaS­e­lect) and choose from a set of overlay banners. Some of the banners are for the NO on 1 campaign in Maine, where they’re fighting an attempted repeal of their same-sex marriage law.

The second site went live earlier this week. Try it out: Create a Profile Picture.