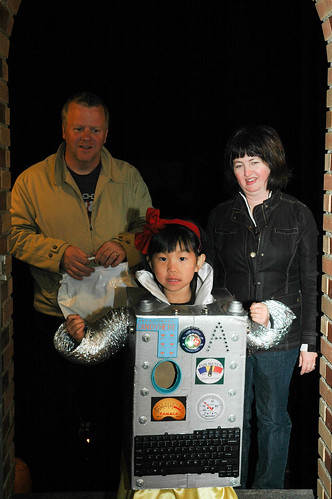 When we moved to Beacon Hill in 2000, we were totally dumb­found­ed by the number of kids who came trick-or-treating to our door. In the prior two years, we had been renting a house in Walling­ford, and we had only had one set of kids each year.

We had about 100 kids that first year. We were not expecting the onslaught and ran out of candy, which led to Emma being berated by some pre­sump­tu­ous mother. We live in a relatively affluent block and kids are brought quite a distance to partake of the goodies. One small boy peered up at Emma once and asked her, “Are you rich?”

And so it’s been ever since: Hordes of kids. Even on cold, wet nights, it’s never dipped below 60 kids.

This year, we had 150 kids. (Actually 149 kids and one dog in costume.) The doorbell rang every few minutes from not long after 6pm until 9 o’clock.

A few years ago, I started taking photos of them. The price of the candy is that they have to stand in the doorway for a photo.

I set the camera up on a tripod with a remote control and clicked away. You can see this year’s set at Emma’s Flickr account. Photos from previous years are there too.