It’s the 100th an­niver­sary of the 1911 census of the United Kingdom, which was taken on the night of Sunday, April 2nd. Ireland was still part of the UK and hence was included in the census.

The census results are online. The Irish results are freely browsable. The UK results cost money.

Three of my grand­par­ents were born in the 18 months following the census.

My maternal grand­fa­ther, George Victor Clery, was born on March 30th, 1900. He died on March 3rd, 1965, twelve days before I was born. I am called George after him and Vincent after my father.

Gen­er­a­tions of Clerys worked for the Munster & Leinster bank, which became Allied Irish Bank in the late 1960s.

My mother’s mother, Ethna MacDonagh, was born on April 28th, 1911. Her parents had moved from Ireland to London a few years earlier. Her father Francis was a journalist and died, I think, when she was a young woman. Her mother Hannah died when I was 8. Hannah was one of the first women to graduate from an Irish university. 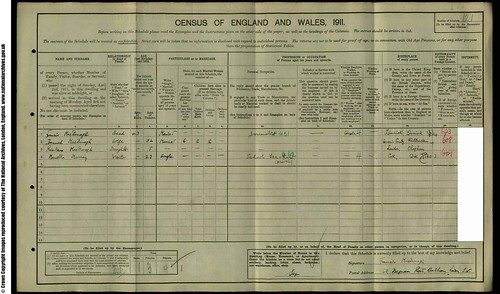 Patrick “Paddy” Reilly was born on June 3rd, 1911, to a well-to-do farmer, near Kells, Co. Meath. He was one of 10 children; nine survived. The last brother, Richard “Dick” O’Reilly, lives near Vancouver.

Paddy studied medicine at Trinity College Dublin but never finished. He spent most of his career selling tyres for Goodyear.

My father’s mother, Kathleen Taylor, was born on August 1st, 1912. Her father was later a supplier to the Irish Dept of Defence, I believe. “Gam”, as we called her, was always secretive about her age and would be horrified that I’ve told you. She dyed her hair black until the day she died, six years ago.