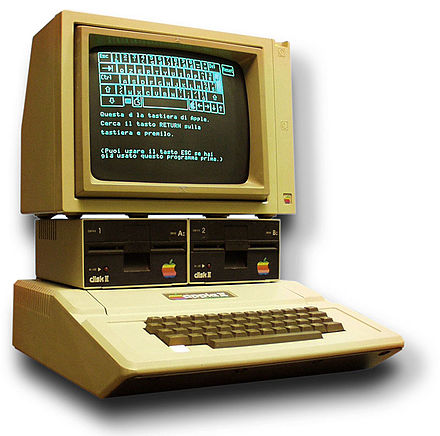 30 years ago today, I sat down at a computer for the first time, and I wrote my first program.

I was in Fifth Year of secondary school in Ire­land—the equivalent of eleventh grade. Personal computers were just coming into Ireland; few people had them. I had been taking an ex­tracur­ric­u­lar course in computer pro­gram­ming, in the school’s physics lab. We wrote code on paper at our desks, as there were no computers in the room. Somehow, I hadn’t realized that there was another room with computers, in a normally off-limits part of the school, until late January.

Once I sat down at a computer, I was hooked. PRINT 2+2? 4! Writing code on paper was boring. This thing was fun!

There were five Apple ][s in that room and eight regulars, if I remember correctly. I spent a lot of time after school in that room over the next few months. I became com­fort­able with AppleSoft BASIC and I wrote some sloppy 6502 assembly language. (Over the next seven years, I wrote a lot of very tight 6502 code.)

Up to that point, I had some vague notion that I wanted to be a scientist. Now I knew I wanted to work with computers.

That year, I got my first summer job so that I could buy a BBC Micro. I worked as a car park (parking lot) attendant at a su­per­mar­ket, standing out in the rain all day long, charging customers for the privilege of parking while buying groceries. It was so traumatic that I’ve never had a non-computer job since—and only the following summer’s job required no pro­gram­ming skill.

I finished secondary school in 1983 and applied, suc­cess­ful­ly, to study Computer Science at Trinity College Dublin. I had a part-time job over the next five years, writing software for RTÉ, the Irish national TV station. I had one full-time job in Ireland after graduating. I came to the States in 1989 and got a Masters in Computers Science at Brown. I moved to Seattle in 1992 to work for Microsoft. I left Microsoft the following year, though I later went back. I’ve spent the last 20 years in the Seattle software industry.

I’ve written a lot of code over the last 30 years. I still get a thrill out of creating elegant software. I’ve written code that’s shipped on every Windows box in the last decade—http.sys is available from Windows XP Service Pack 3 on­ward­s—and Vim comes with every Linux and Mac.

I had no idea that day that I had changed my life, that I had found my vocation.