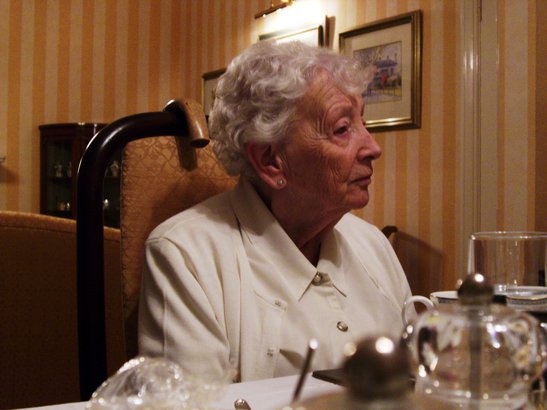 My mother’s mother’s sister, known to all of us as Auntie Pat, was born on January 2nd, 1915, in London. My mother and a few other family members will join her today for her 100th birthday party. I understand that the Queen has been notified and will be sending a telegram of con­grat­u­la­tions, but can’t attend in person.

Pat is frail but her mind is still good, and she continues to live by herself in her own home in Bournemouth, England. In the last decade, Pat has twice emigrated to New Zealand, but it didn’t work out either time.

Pat married only once, in her sixties, to a Polish émigré who had served in the British forces during WW II. She was widowed a few years later.

Although she has otherwise spent her entire life in England, Pat’s parents were Irish. The Irish connection strength­ened when Pat’s sister Ethna visited cousins in Ireland and met my grand­fa­ther. Pat’s father was a journalist, who died when Pat was a young woman (I think). Her mother was one of the first women to graduate from an Irish university. She too lived to a great age and died when I was about eight.

Several of my grand­par­ents on both sides and their siblings lived into their eighties and nineties, but Pat is the first of my relatives to reach 100 years of age. Sadly, the only other survivor of that generation, Pat’s younger sister Joan died last week. There was one other sister, Rosaleen who died young, just before Ethna’s wedding, and a brother. Desmond was an extremely mild and unworldy man who joined the De La Salle Brothers at a young age. Desmond died about 30 years ago, while my grand­moth­er died 15 years ago this month. Pat, like my grand­moth­er, is very refined, but also quite de­ter­mined—as you might expect from someone who moved around the world twice in her nineties.

blog comments powered by Disqus
Review: The Thirty-Nine Steps » « For Want of a Nail