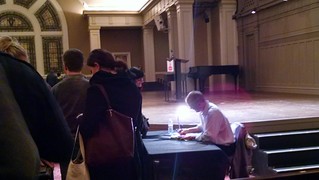 We went to hear Matt Taibbi speak at Town Hall Seattle tonight. He spoke about the topic of his new book, The Divide, which covers inequality in the United States. After several years of covering white-collar crime in Wall Street after the financial collapse of 2008, and not seeing any pros­e­cu­tions, he got curious about what the criminal justice system is like for the poor. Community policing is harsh in many poor com­mu­ni­ties, like Ferguson and Staten Island, where the police regularly issue tickets for minor in­frac­tions. Those being summonsed can ill-afford the fines, often leading to worse con­se­quences. The U.S. prison population is now twice as high as it was in 1991 and four times as high as 1980.

I bought the book.