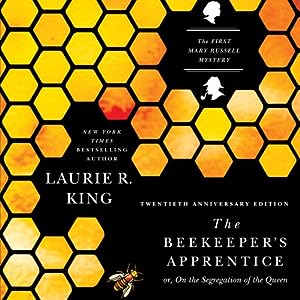 As I mentioned last week, we’ve been listening to some audiobooks. We finished listening to The Bee­keep­er’s Apprentice last night. I read the book many years ago and I’ve read most of the subsequent books in the Mary Russell series.

Fifteen-year-old Mary Russell is walking on the Sussex Downs with her head in a book one spring day in 1915, when she literally trips over Sherlock Holmes. Although Holmes is almost four decades her senior, the two brilliant, lonely people become friends and Holmes tutors Russell in the art of detection. Within a few years, his protégé becomes his partner. In a later book, they marry.

King offers a fresh take on Holmes, putting a more human face on him. Russell and Holmes are both expertly drawn characters, and King tells a good story. At times, she revels in the minutiae of daily life, while at other times, the plot gallops along.

The audiobook narrator, Jenny Sterlin, also does an excellent job, finding the right tones for both Russell and Holmes.