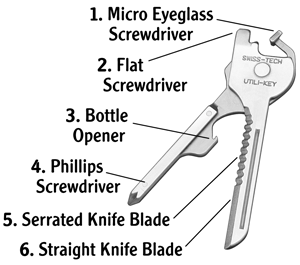 When I posted a link to the new Leatherman Tread Bracelet on Facebook the other day, I mentioned that I had recently forfeited a little Swiss Army knife that I’d owned for 30 years at airport security. The Tread is a bracelet where each link has one or more mini-tools. The bracelet itself is about $150–$200, depending upon the exact tools. With a watch, it’s about $600.

While I can see the appeal, I have no intention of buying one. Jan mentioned in the comments that he carries a Utili-Key 6-in-1 Multi-Tool on his key ring, and he’s never had any problems with it at TSA check­points. Since it was only $6.21 at Amazon, I bought one. And I spent $11.25 on the Micro-Max 19-in-1 Multi-Function Pocket Tool while I was at it. And I bought some books. And an Aeropress Metal Filter.

The Utili-Key weighs only half an ounce and is just slightly longer than most keys. It im­me­di­ate­ly found a place on my primary key ring, along with the house keys, the barcode key for the gym, the barrel key for the laptop cable lock, and the Pronto Cycle Share key. In my brief tests, the Utili-Key seems well made and I think the tools will do in a pinch when better tools aren’t handy. I think that when using the bottle opener, I’ll have to take care not to cut myself on the little blade. As Jan said, it’ll work for the first bottle, but it might not be a good idea for the fourth.

The Micro-Max 19-in-1 is amusing, but I doubt I’d carry it often, since it’s bulkier and heavier.