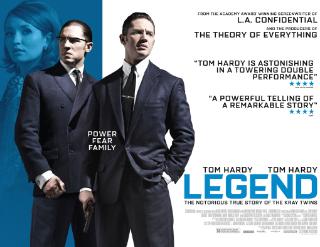 Tom Hardy has had a very good year, starring in Mad Max: Fury Road and playing both Reggie and Ronnie Kray in Legend.

Legend loving recreates London in the Swinging Sixties when the Kray twins were not only notorious gangsters but also celebri­ties, mingling with the rich and famous in their nightclubs. Reggie is portrayed as the smarter, charming, and stable brother; Ronnie as erratic and psy­cho­pathic; both are capable of great violence. The film is narrated from beyond the grave by Reggie’s wife, Frances, and con­cen­trates mostly on Reggie. Hardy is excellent as Reggie, but hard to understand as Ronnie, while Emily Browning does a fine job as the young wife who’s in over her head.