I had a mole excised today.

I have a few moles on my body, mostly on my legs. My doctor has disliked the look of some of my moles for years. After my most recent annual physical, I went to see a der­ma­tol­o­gist a month ago. There was only one mole that she wanted to treat, low on my left calf. She took a biopsy, using a tiny little saw to peel the top layer off after the area had been numbed with a local anesthetic. 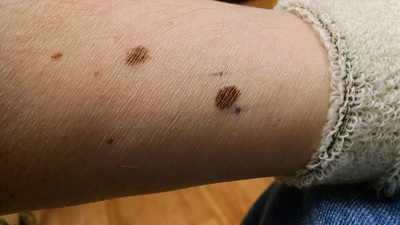 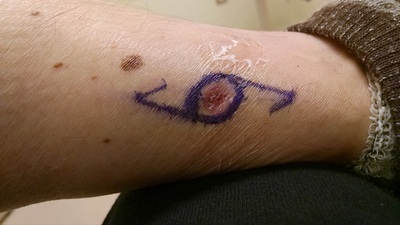 As the plastic surgeon explained today, I had an atypical nevus (mole 1 2) with moderate dysplasia. He needed to remove the area 3mm around the existing mole to fully excise it. To give himself extra skin to close up the excision, he had to cut the outrigger pattern shown in the second photo.

The procedure took about 45 minutes under local anesthetic. As the mole was on the back of my calf, I had to lie face down on the operating table. I would have liked to have seen some of the operation but I had no op­por­tu­ni­ty to do so. The surgeon proclaimed himself happy with the operation.

So far the wound hasn’t hurt much. I’ve kept the foot elevated for most of the day. It’ll be a couple of weeks before I can cycle to work again or resume running.