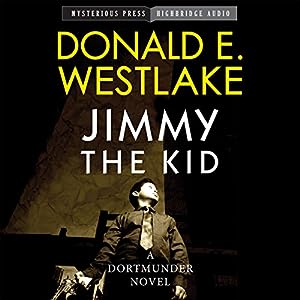 I rarely listen to audiobooks, except on long driving trips. We listened to another Dortmunder book on our drive down to and back from Portland for PyCon.

Dort­munder’s jinxed associate Andy Kelp spends a few days in jail and reads a book called Child Heist by Richard Stark, which Kelp believes to be the blueprint for a perfect crime. Dortmunder, always wary of Kelp’s schemes, doesn’t appreciate having a plan brought to him, since he’s always been the planner of the crew. Some of the crew aren’t eager to kidnap a child either, but eventually they all come around. Un­for­tu­nate­ly for them, the kid is much smarter than they are, so the perfect crime fails.

Part of the joke is that Westlake wrote a series of novels about the ruthless career criminal Parker under the pseudonym Richard Stark. Child Heist is not a real Parker novel, however.

The audiobook is very amusing with a fine per­for­mance from the narrator.

The plot was loosely inspired by the real-life kidnapping of a Peugeot heir. Apparently there’s a lousy movie adaptation with Gary Coleman made in 1982, and it was also filmed twice more in Germany and Italy.