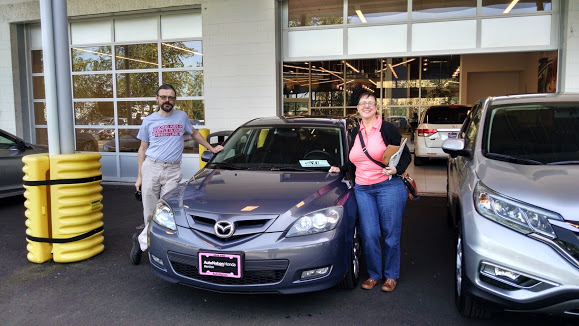 The 2001 VW was still running fine and had recently passed the 150,000-mile mark. However, it, like the 1992 Golf, had a manual trans­mis­sion (a “stick shift”). Emma had a Morton’s Neuroma removed from the ball of her left foot around 2003. It seems to be coming back and she was having increasing difficulty depressing the clutch. Between the ever-increasing traffic in Seattle and Seattle’s steep hills, drivers need to change gear often. It was time to replace the car with an automatic. We only have one car because I don’t often need one, since I cycle or take transit to work. I had planned to drive this car for many more years, so I was sad to give it up.

We got a sizeable tax refund this year and we went car shopping the day after Emma’s birthday. We quickly found a car that we liked. Aside from com­par­a­tive­ly high mileage—al­most 140,000 miles—it was in superb condition. The previous owner must have been neurotic about keeping the interior spotless. In comparison to some other used cars we saw where there was no doubt that the interiors were well used, this one looked as if it had been hardly driven. We’ve since driven it up to Vancouver BC and down to Portland OR, and we’re still very happy with it. I look forward to many years’ use from this one.

I sold our faithful 2001 VW to Raven and Iain, who badly needed a second car, since they now live north of Marysville.