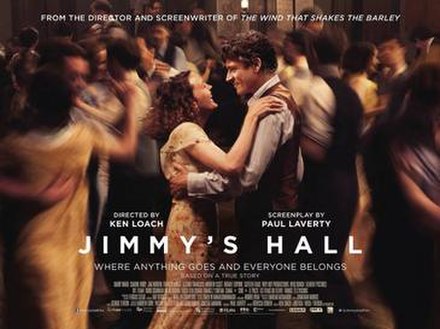 Jimmy’s Hall tells how Jimmy Gralton became the only Irishman ever deported from Ireland. Gralton returns to rural Ireland from the US in 1932, after being run out ten years’ earlier during the Irish Civil War for Communist activity. He revives the dance hall he had built previously, as it is a much-needed outlet for the young to dance, study, and talk, and im­me­di­ate­ly runs afoul of the local powers, par­tic­u­lar­ly the parish priest. Tensions escalate, cul­mi­nat­ing in his de­por­ta­tion.

Ken Loach is never subtle about his own socialist beliefs. Jimmy’s Hall is a polemic about the struggle between the stifling, small-minded, social conformity of the Irish Catholic Church, allied with the wealthy and powerful and their enforcers, against the down­trod­den yet defiant ordinary people, as movies, radio, jazz, the Depression, and fascism transform lives. We see a good deal of Gralton and of the parish priest, though they share few scenes, while we experience little of the other characters. Still, we learn about a period that’s little known now and we are moderately en­ter­tained.