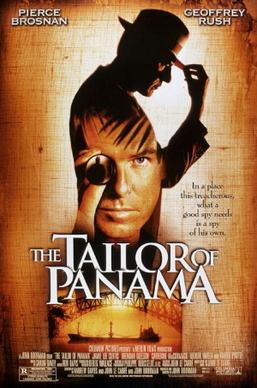 Andy Osnard (Pierce Brosnan) is a disgraced MI6 officer, packed off to Panama, where he recruits Harry Pendel (Geoffrey Rush), the eponymous tailor. Osnard is an un­scrupu­lous dirtbag; Pendel is a fabulist in need of money; they’re made for each other. Panama is “Casablan­ca without the heroes” and Pendel spins tall tales that make their way back to London. Eventually, he outdoes himself, claiming that the Canal is to be sold to the Chinese. Osnard manages to procure $15 million to fund a revolution, which he plans to abscond with.

Brosnan plays against type as a crooked bully, as Rush steals our sympathy as a decent sort out of his depth. An amusing satire adapted from John Le Carré’s novel.