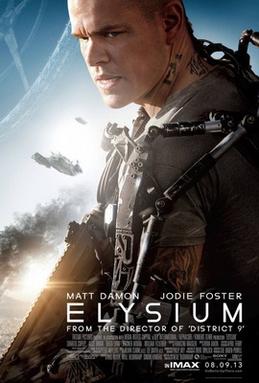 By 2154, the rich have moved off-planet to a utopic habitat, while the teeming billions languish in slums below. Elysium has Med-Bays which can cure anything; Earth scrapes by. Max (Matt Damon), an ex-con des­per­ate­ly in need of a cure, agrees to shoot down the shuttle of an Elysian CEO and hijack his brain. This lethal variety of industrial espionage leaves him holding the keys of the kingdom and makes him Los Angeles’ most wanted.

Blomkamp has taken the ever-growing gap that exists between rich and poor today, and ex­ag­ger­at­ed it into an un­scaleable cliff with the have-nots huddled at the bottom of the gravity well. Elysium looks like Bel-Air in space: opulent mansions scattered across verdant lawns circling a giant Stanford Torus. Los Angeles has de­gen­er­at­ed to a post-apoc­a­lyp­tic third-world slum. Somehow, the reluctant hero Max in his ex­oskele­ton suit defies the odds and tears open the gates of paradise. Damon make it almost credible, while Jodie Foster and Sharlto Copley are suitably ruthless as the villains.