Having dealt with GPG last week at work, I remembered that I had intended to write a blog post about how we used GPG, Blackbox, and Paperkey to store secrets in Git at my previous job.

For example, we had a cre­den­tials.sh that exported en­vi­ron­ment variables, which was managed by Blackbox:

The XT prologue ensures that even if this script is source’d with set -x (debug tracing) enabled, that executing this script will not leak secrets into build logs. The epilogue turns the xtrace option back on again if it was on at the start.

We used LastPass to manage personal cre­den­tials that were needed in a browser, but it wasn’t suitable for automated use in CI.

Blackbox builds on top of GNU Privacy Guard (aka GnuPG aka GPG) to automate the secure management of a set of files containing secrets that are “encrypted at rest” and stored in a Version Control System (VCS), such as Git. These registered files are owned col­lec­tive­ly by a set of ad­min­is­tra­tors, each of whom has their own separate keypair (a public key and a private key) stored in their own keyrings. The ad­min­is­tra­tors’ public keys are also present in Blackbox’s keyring, which is stored in the VCS. Using Blackbox’s commands, any ad­min­is­tra­tor can decrypt a file containing secrets, update the secrets in the file, encrypt the updated secrets file, and commit that encrypted file into the VCS. Ad­min­is­tra­tors can be removed from a Blackbox in­stal­la­tion, after which they will not be able to decrypt the updated secrets files[1].

How does Blackbox encrypt a file so that any ad­min­is­tra­tor can decrypt it? It uses GPG to encrypt the file for multiple recipients, say, Alice, Bob, and Carol.

When GPG encrypts a file, it:

Only the recipients have the private keys (in theory, at least). Therefore, only a recipient can decrypt the encrypted file.

To decrypt the file for a recipient, GPG:

This is a hybrid scheme. Symmetric encryption is a lot faster than public key/private key asymmetric encryption, so it’s used to encrypt the actual data. Fur­ther­more, if the data were entirely encrypted with a recipient’s public key, then encrypting for N recipients would mean that the size of the result would be pro­por­tion­al to the number of recipients times the length of the original data. With the hybrid scheme, the header grows a few hundred bytes for each recipient but the data is encrypted only once, with faster encryption. 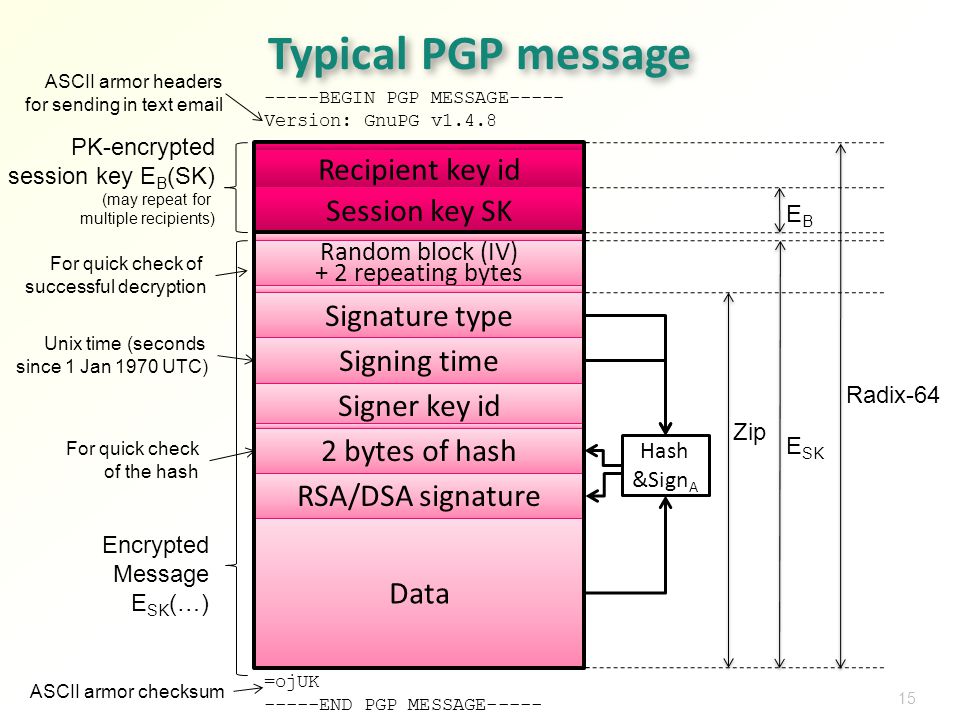 You can use gpg --list-packets to dump the contents of any GPG message. An Advanced Intro to GnuPG dives into the message format in more detail.

Going back to my original example, cre­den­tials.sh is a file registered in blackbox-files.txt. This file should never be committed to the VCS—add it to gitignore to prevent ac­ci­den­tal­ly committing it. Instead, cre­den­tials.sh.gpg is committed. Since the latter is a binary file, comparing two versions in cleartext is tricky.

Ad­min­is­tra­tors can encrypt and decrypt Blackbox’d files because they have their private key on a local keyring.

Getting a private key onto other hosts can be tricky. We developed this technique when we were using Atlassian’s hosted Bamboo CI service. We later used it with hosted Jenkins at Cloudbees. Because we were using a hosted Continuous In­te­gra­tion (CI) service, we had limited control over what we could install. If I remember correctly, Bamboo had support for secret en­vi­ron­ment variables, but did not provide a way to store a keyring file. There was also a limit on the length of the en­vi­ron­ment variables, I believe.

We were able to get past this by using Paperkey to (de)serialize the secret key. Paperkey can extract just the secret part of a secret key: ‘Due to metadata and redundancy, OpenPGP secret keys are sig­nif­i­cant­ly larger than just the "secret bits". In fact, the secret key contains a complete copy of the public key.’

To create the CI keypair, follow the portion of the Blackbox "role accounts" in­struc­tions that create a sub-key with no password for ci@example.com.

Then, serialize the public key and the secret with Paperkey:

Copy and paste the contents of public_key.txt to the GPG_PUB­LIC_KEY en­vi­ron­ment variable in the CI. Similarly, copy secret.txt to GPG_SECRET.

Securely delete everything in /tmp/NEWMASTER.

We used a script like this on the CI to re­con­sti­tute the keypair and to decrypt the other secrets from Blackbox:

At the end of the build, run black­box_shred_al­l_­files to destroy any decrypted files.

blog comments powered by Disqus
Review: Fire and Blood » « A Use for Octal: Calculating Modulo 36 from Modulo 9