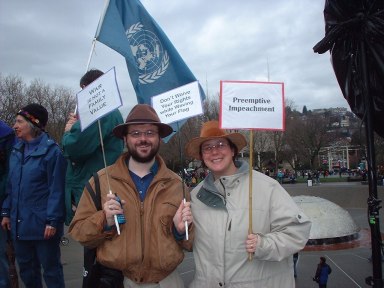 Along with perhaps 30 million others, Emma and I took part in a peace rally on Saturday. We were delayed finishing up our signs, so we failed to meet up with our friends before the Seattle rally, although we did run into another friend as the march set off.

There were an estimated 20,000 people at the Seattle rally, according to the Seattle P-I. I would have thought more. It took eighty minutes from the first marchers setting out to the last of the marchers getting a few blocks away from the Seattle Center.

The night before the rally, I found a number of slogans on a mailing list, and I turned 16 of them into signs (see the second of my photos). We gave most of them out to strangers before the rally. I marched with "Don’t Waive Your Rights while Waving Your Flag"; Emma had "Pre­emp­tive Im­peach­men­t".

I’m glad we went. It was good to feel some solidarity. It was especially good to learn that so many others turned out at other rallies around the world. We showed the world that not everyone in America is in lockstep behind Bush.

Bush, however, remains unim­pressed, at least in public. We can only hope that it makes him pause even a little in private, but I doubt it.