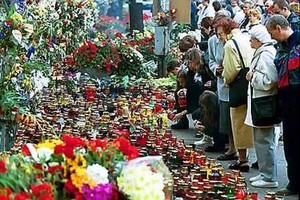 Nine-Eleven. The date burned into everyone’s brain. One of those dates where everyone remembers where they were when they heard the news. Emma and I awoke to the radio telling us that planes had crashed into the World Trade Center. We went downstairs and watched the TV in horror.

For a time, an all-too-brief time, the country pulled together in a show of unity and grief. The world joined us in an outpouring of support.

There are many reasons why history will condemn George Bush, but one of the most serious is his squan­der­ing that good will for quick partisan advantage. A better man could have built a bipartisan consensus to tackle terrorism in a serious way. Ask not what your country can do for you – just go shopping.

He should have finished the job in Afghanistan. Instead, his attention turned to fomenting the irrational, immoral Iraq war, which turned the world against us.

In many ways, the terrorists have won. This country slides slowly towards a police state, as Bush arrogates imperial powers to himself. Bush and bin Laden have a symbiotic re­la­tion­ship. Bush has turned Iraq into a recruiting ground for Al Qaeda. Bin Laden is the ever-threat­en­ing boogeyman to scare the American people.